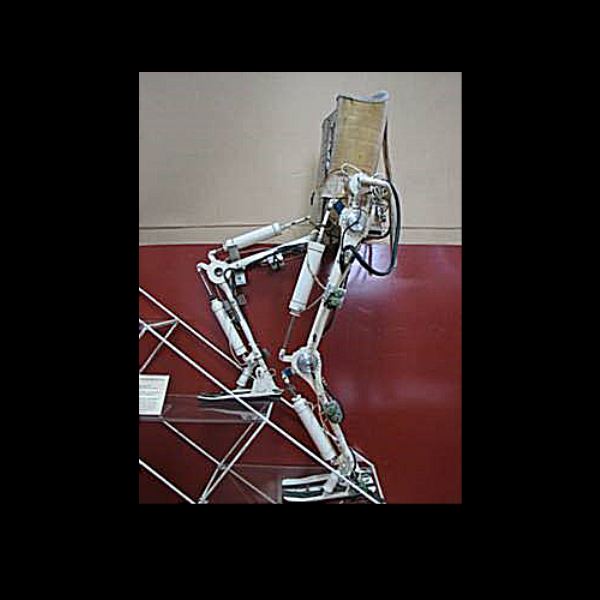 Following on from the Hardiman exoskeleton. The first gait assistance exoskeleton was developed at the Mihajlo Pupin Institute during the late 1960’s to the early 1970’s. It was the forerunner to all modern day exoskeletons.

Developed by a team at the Mihajlo Pupin Institute, led by Professor Vukobratović, the kinematic walker, partial exoskeleton and active suit were one of the first exoskeletons to be designed for gait assistance.

The kinematic walker was a lower limb exoskeleton, with foot plates and an extended spinal region for further attachment. Force sensors was placed in each of the foot plates allowing for determination of magnitude and location of ground reaction forces.

It is now owned by the Polytechnic museum in Moscow and the State Museum Fund of Russian Federation, being displayed in the development of automation and cybernetics area.

The active suit, was a modular semi-soft active orthotic exoskeleton. Modular meaning it could be broken down into smaller assembles localised at specific points on the body, such as an arm module. Being active meant the exoskeleton used actuators to produce motion, not a passive system which is the opposite. This exoskeleton used electromechanical actuators with electronic programming to operate. It was primarily designed to test and evaluate the feasibility of the drive system for orthotic devices.

This was the first exoskeleton to use electric motors, therefore can be considered as a forerunner of the modern-day exoskeletons.

The research and the Mihajlo Pupin Institute led to the widely accepted notion of the Zero-Moment Point. This is a point on the sole of the foot, in which the resultant moment of all forces acting on the biped system, is equal to zero, which formed the theoretical basis for biped gait stability maintenance. A system used in modern robotics.

The dynamics of a locomotion in human gait is complex due to our bipedal walking. The weight and inertia of our own body needs to shift constantly to maintain stability. The Zero-Moment Point is a serious of calculations to maintain stability in robotic bipedal systems. Using angular moment equations and predicted joint trajectories, the postural stability of the robot can be maintained.

Coming up in part 5... The vision for exoskeletons and why pop culture has changed the perception of what a exoskeleton should be.