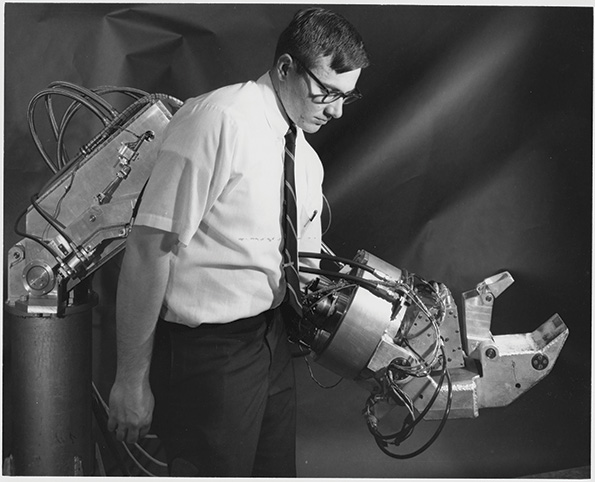 One of the first powered exoskeletons was designed by General Electric in the late 60's. Post war boom in America led to many inventions, the Hardiman was the vision of the future for human enhancement.

General electric designed one of the first powered exoskeleton’s in 1960’s. The Hardiman which stands for ‘Human Augmentation research and Development investigation’ plus ‘Man’ for the word manipulator, was developed from 1965 to 1971.

The Hardiman consisted of two layers. An inner exoskeleton which was a structure that allowed the user to be attached into the whole exoskeleton and an outer exoskeleton structure designed for carrying the large loads. This kind of design is called, master-slave.

"The exoskeleton, called 'Hardiman,' mimics the movements of its wearer, presenting a literal union of man and machine. Thus, the human's flexibility, intellect, and versatility are combined with the machine's strength and endurance. "

‘RESEARCH AND DEVELOPMENT PROTOTYPE FOR MACHINE AUGMENTATION OF HUMAN STRENGHT AND ENDURANCE’  Makinson, B. John,  1 May 1971

This design methodology tries to combine the dexterity of the human user with the power of a robot. The user would directly input the required motion and manipulation to the inner lightweight layer, then the heavy bulk powered out layer would copy and respond accordingly.

The first prototype was made of electric and hydraulic power. It has 30 mechanical joints across the body. Each joint was appointed to provide articulation to the exoskeleton so that the human user could move freely. The exoskeleton had certain attachment points to the human, these are at the feet, waist, forearm and hand. The design belief was that minimal contact points allow for free movement of the leg and arms during operation.

However, General Electric only developed a single arm. This was due to the physical weight of the prototype, which was a projected 1500lbs. As much as it was designed to lift! The walking speed was predicted to be 1.7mph, adding these factors together didn’t warrant further funding so the project stopped.

The control system of the Hardiman, was based on the master-slave principle.

The control system of the Hardiman, was based on the master-slave principle. However, this produced violent uncontrollable vibrations due to the response time between the master input to the slave output, combined with the sheer number of actuators. The control program wasn't robust enough to operate smoothly.

The research that had gone into Hardiman was later used by general electric in something called the 'walking truck'.

This four legged, 11 ft tall robot was design to augment walking locomotion from the user to the vehicle. It was made in 1966, with the design using hydraulic actuators to move the legs. The user would stand inside the cockpit attached to an movable exoskeleton type frame which controlled limbs of the vehicle. The pilot could use his left arm for the front left leg, the left foot for the left rear leg and vice versa.

The concept was to combine the dexterity of the human pilot with the power and ruggedness of the vehicle. It weighed 3000lbs (1360kg) and had a 90bhp engine for driving the hydraulic pumps. Being able to potentially lift a 500lbs (227kg) payload.

This is similar to the Hardiman, in which the human controlled a master robot, and a slave produce motion relative to the input.

Next part in the series will cover the 'kinematic walker'.