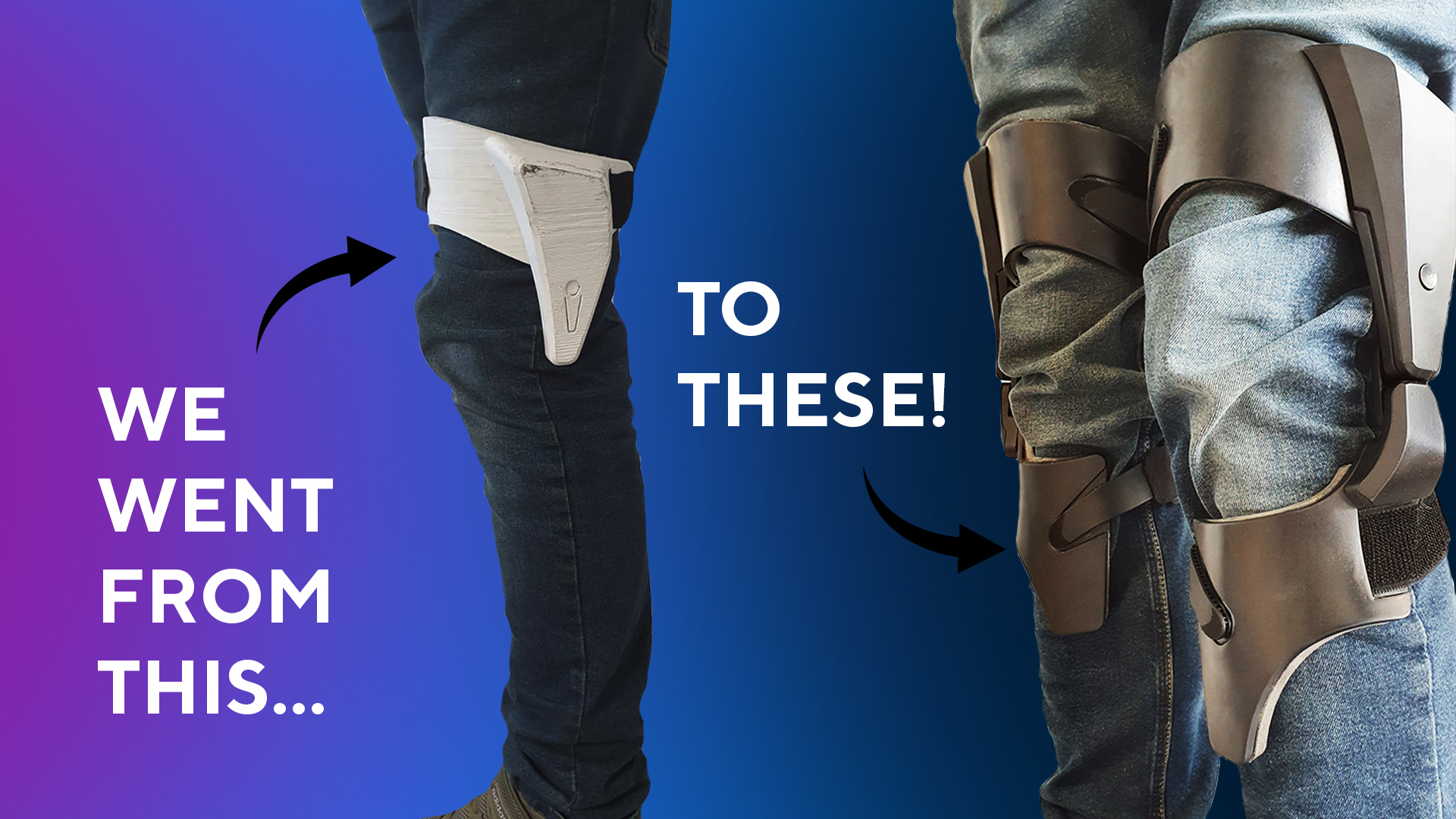 Have you ever wondered how a product comes to life? Learn about the product life cycle with the path AgileVR has taken to from concept to consumer product. AgileVR has gone through many prototypes from drawings to a wireless, haptic feedback exoskeleton for motion tracking. Mechatech and I, have used multiple manufacturing techniques to produce each prototype at different stages.

The product started out as a thought process and drawings. Getting ideas out of the designer’s minds and onto paper is a great exercise to start any conceptualisation stage and discuss features that might be needed in the product.

AgileVR came out of, the gap in the market that VR locomotion and immersion produce, by not including the user’s natural movements.

The first stage functional prototype was the next phase after conceptual drawings. To produce this, I designed a generic interface for the electronics to be fitted to the outside, so the team could use breadboards and breakout boards. The prototype was part of full body exoskeleton design, so the design had extra features which were being tested out. Hence, why this is only a works like prototype.

Mechatech at the time owned 2 FDM 3D printers, which you can find more information about here. I used these to create around 5 shin parts, varying the curvature, size and thickness for comfort.  However, the prototype above was printed in nylon on a SLS printer we outsourced.

This prototype allowed us to try out all the sensors we required and the placement of which location works for accurate data extraction.

The next stage was for our electrical engineers to develop a custom prototype PCB which included all the required components and could be programmed with our custom firmware.

These PCBs were then added to an in-house printed prototype. This prototype was a looks-like prototype, so I could test the comfort, fit and material properties of the product. This is where I decided to use TPU on the FDM printer to give a flexible, tough material property to the shin and thigh plates.

The custom electronics were connected via a data communication cable. This allowed us to test the functionality of the electronics in a compact design and interconnections between the components.

The next stage was to produce parts with similar material properties to a final material and with high accuracy, to produce a working and looks like prototype.

Full SLA 3D prints outsourced by professional 3D printing bureaus were then used to produce high quality models of this prototype. Silicone moulds were produced which allow polyurethane parts to be cast.

This produce involved us pouring uncured RVT silicone over a 3D printing SLA model combined with runners and feeders for the polyurethane to be poured into at a later stage.

Once the silicone cured after 24hrs, we then had to cut the mould open to release the part and create the two halves of the mould. The 3D printed part could be reused for further mould making.

Multiple iterations of parts could now be tested for how the material reacts, forms and performs. As seen above, parts were produced on a small batch scale.

Polyurethane foam was also cast to produce the desired form and functionality. Material choice was explored at this stage, for stiffness, toughness and durability. Early stage foam padding (left) was designed but was quickly redesigned to increase surface area (right).

The next custom built electronic PCB’s were manufactured on a small scale. They were specifically designed with form as well as function for the first wearable prototype. The size was massively reduced. This board still went through 3 iterations before it was manufactured properly. Small features like hole placement for cable strain relief needed adjusting, causing an iteration.

A colour study was undertaken by the team, to explore the possibility of what colours AgileVR could be. We determined that including too many colours, 3 or more, was too many. Therefore, we decided to go with a 2 tone product colours scheme. Which is something you’ll see in our current product information and across our special edition products.

The first wearable prototype was manufactured in house, using the polyurethane casts and CNC machine joint body. It incorporated the custom electronics which allowed for functional testing for motion tracking.

The next Stage of AgileVR was then undertaken. After the early version was released to the public for community feedback and testing. The product went back to the engineering board. This is because I wanted to listen to the community to get the features they wanted into the product while address issue’s they had. The product was to include wireless communication and haptic feedback so the casing needed a new design while maintain the core functionality of the early product.

So, I went back to using FDM printing in house, to produce the first couple of prototype casings. I could test the fit on the thigh, while including the new shape of the casing which had more components inside it. Placement and shape of the button was explored at this stage too.

Components were purchased in to start the development of a new working prototype. This included batteries, haptic motors and metal CNC joint parts. While a new DLP resin 3D Printer was purchased for in-house resin prints for high quality parts, to test function and form.

A new looks like prototype was then produced, while waiting for more components such as the electronic boards and USB charging boards, to create a working prototype. All components could be tested for tolerance fitting and detail function because of the high accuracy of a DLP printer, something an FDM can’t provide.

New custom electronics have arrived and awaiting testing and programming to create the final working prototype, which will test function and form all in one. This will likely occur during our crowdfunding period.