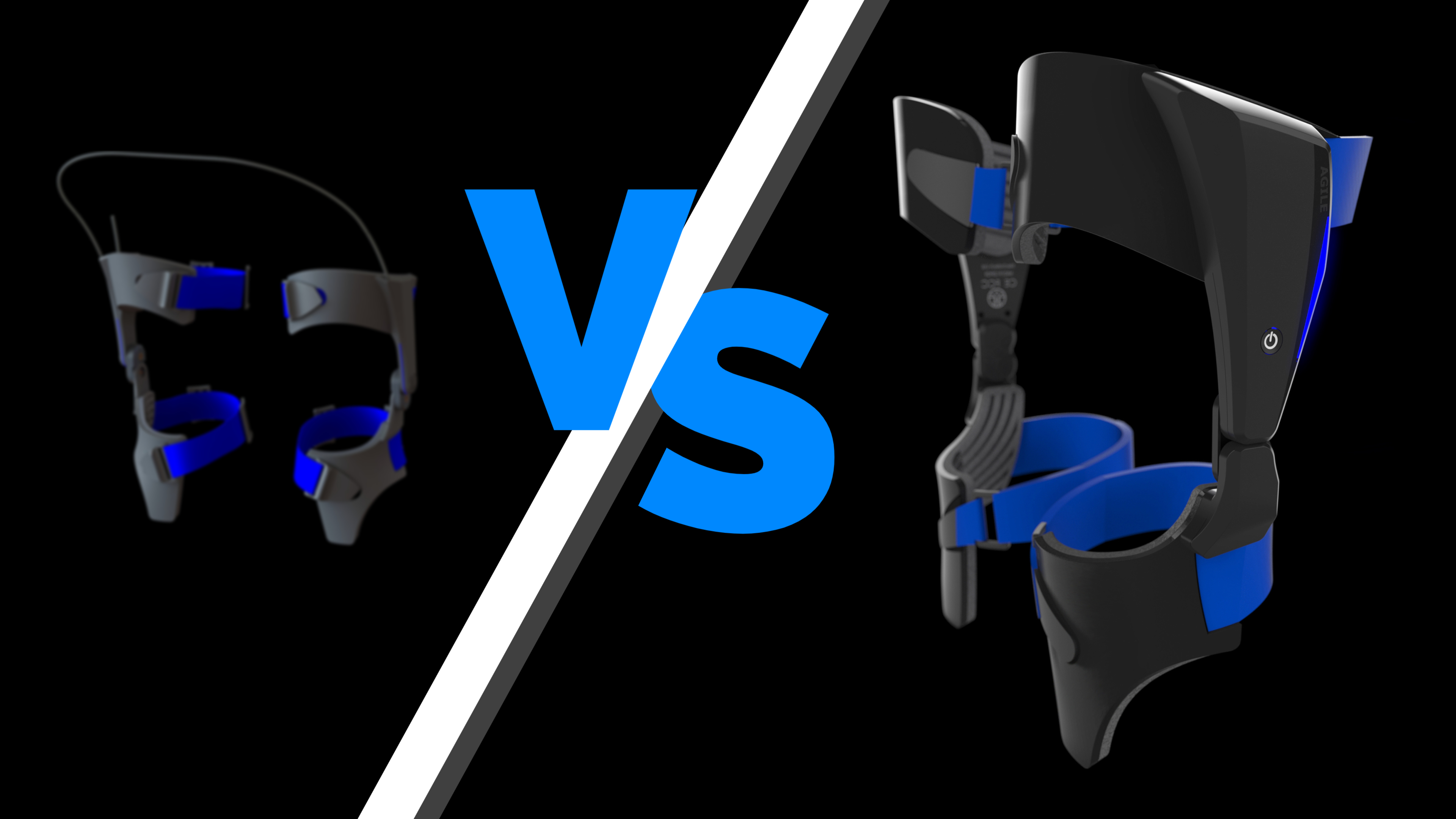 Journey of AgileVR to Kickstarter

New AgileVR live on Kickstarter soon! If you have been wanting a solution to locomotion in Virtual Reality (VR) or a more immersive VR experience, look no further. Mechatech Ltd has been working on a revolutionary new exoskeleton technology to deliver the next level in VR Immersion. Learn about our journey to launching AgileVR on Kickstarter and why you should back it, in this article.

AgileVR has been an accumulation of 8years of research and development. Mechatech started out funding PhD engineering research into powered enhancive and assistive exoskeletons at The University of Leeds in the UK.

For the last 3 years we have been focussed on modular motion capture exoskeletons, providing detailed understanding of robotic wearables. Mechatech now needs your backing to bring our new VR exoskeleton technology out of academia and into your hands as a consumer product.

In summer 2019, Mechatech released an early version of AgileVR. The intention was to make a small batch of products to conduct market research and learn about different production methods, hoping to get consumer feedback, real life testing and influencer feedback. This was all achieved by the end of 2019.

"The early version gave Mechatech the opportunity to learn about the problems of the product and the desires from a consumer perspective."

The early version of AgileVR

The early version of AgileVR was a knee exoskeleton, one module on each knee, connected via a cable for communication, which you could plug into your VR ready PC as an addition to your existing setup. By walking and moving naturally on the spot, fully immersed in VR, it outputs game locomotion to enhance immersive gameplay.

The product was priced at a high amount, as each product was being moulded and hand finished by the small team of engineers in the UK office, also offering a very personalised setup and user focussed experience.

The product came with a supporting interface software to allow VR games, that were supported, to be easily launched and then controlled by the AgileVR.

The early version gave Mechatech Ltd the opportunity to learn about the problems of the product and the desires from a consumer perspective. Many AgileVR’s were given out to youtubers, researchers, technology reviewers and influencers. Watch some of their content here by clicking on the link:

All the feedback and real-world testing was collated for the engineering team to make specific improvements and design changes.

The main feedback that Mechatech received was that the device gave an amazing virtual experience. It felt natural to walk and run on the spot, and many people commented on a reduction in motion sickness that they previously felt. It was surprising to the team how quickly and easily people adapted to controlling games by actually walking rather than teleportation or moving a joystick. We took this a major success of the product and a confirmation that we were on the right track with its design.

The first improvement that the community wanted was, a wireless device. Though the early version provided a 5m long cable which was longer than most headset cables, and most headsets are wired, a lot of people wanted a wireless product for completely free motion and gameplay.

The second item for us to address was the strength and durability of the product. Due to a design flaw in the specialised joint system, the product would often fail at the adhesive bond and therefore break at this weak spot during transit due to decompression and temperature gradients during transportation.

Further feedback came in the form of compatibility with headset technology. Due to the multiple headset manufacturers and the unknown of a user’s PC setup there was some difficulty in connecting with some of the elite headsets such as Pimax and Valve Index. The product did have flawless compatibility with Oculus systems, and worked well with the original HTC Vive.

Mechatech Ltd took the original AgileVR to Insomnia65 in August of 2019.  The purpose of this was to get the public reaction to the product and to get immediate feedback on the product being used by many people.  During 4 days at the largest gaming event in the UK, over 500 people used the AgileVR, and the response was overwhelmingly positive. This gave the engineering team vital feedback concerning the concept itself and the mechanical design of the product.

The team learnt that the strapping system needed refining.The strap buckle was easy to apply, only taking a second, however user’s struggled to get the buckle off the product to release the leg exoskeleton.This was an ergonomic problem and has been addressed in the new version of the product.

Mechatech Ltd also demonstrated the early version AgileVR at smaller events, such as the VR Manchester meetup where early adopters and VR enthusiasts were similarly very receptive to the product and its use.

After listening to the community, and testing at events, Mechatech has gone back to the engineering of the product and addressed all of the improvements people requested.

AgileVR is completely wireless! Both units of the product are independent from each other and they wirelessly communicate with the PC providing a truly immersive experience with no wires to break the intensity of the gameplay.

The product will boast a 10hr battery life, at minimum with hope that by release this can be increase by another 50%. Each unit will require just a simple USB charger.

The wireless communication also allows our Agile system to be expand in future products and developments for more complete immersion.

The product will now include haptic feedback! Each module will have a vibration motor included in the unit, providing haptic vibration for virtual interaction. As well as being able to control locomotion in VR, AgileVR will now allow you to interact with VR in a new way - your legs will now be able to feel virtual reality. This means you could represent forces on your legs, or walking through water, or on different surfaces – we are still exploring this.

In game support for locomotion won’t yet support this feature, because it is brand new, and existing games do not support this, but our intention is to allow this in future. This is why we are working on improvement 3.

A Unity SDK will be developed alongside the product, so that developers can fully utilise our product to its full potential.

Game developers will be able to design leg interactions and feelings based on the virtual world and the haptic feedback. This all adds to the enhanced immersive experience that AgileVR already gives.

The comfort of the product gained mostly positive feedback from the community, but the engineering team wanted to provide the best comfort possible. Therefore, they designed a new strap system for greater ergonomics and user experience.

The original buckle has been replaced, and the elastic adjustment has been revised so that even more people can fit the product. The ergonomics of AgileVR have been designed to fit the 95 percentile of the human size data. However, with the new strap system even more sizes and shapes of leg will be accommodated.

The product has also seen a 15% increase in the thigh pad and foam areas, providing a larger surface for grip and weight distribution.

The early version AgileVR was RIM moulded by the engineering team in the UK office using polyurethane. This was because of the small volume made. However, the new AgileVR will be professionally injection moulded and fabricated by high quality suppliers, making use of ABS for its material properties of strength and impact resistance. This will improve the quality and durability of the product. This has required a full redesign on certain parts of the product due to the manufacturing technique requirements.

The firmware of product can now be updated over wireless communication. Which means future enhancements to the product for functions like haptic feedback can be installed by the user.

All these improvements have been included because Mechatech Ltd wants to respond to their community, with another big win for the consumer being in the cost of the product.

Mechatech Ltd will be able to bring all these new features, improvements and functionality for less than half of the early version of the product!

“Mechatech Ltd will be able to bring all these new features, improvements and functionality for less than half of the early version of the product!”

Help Mechatech Ltd make the AgileVR a real reality and not a virtual one!