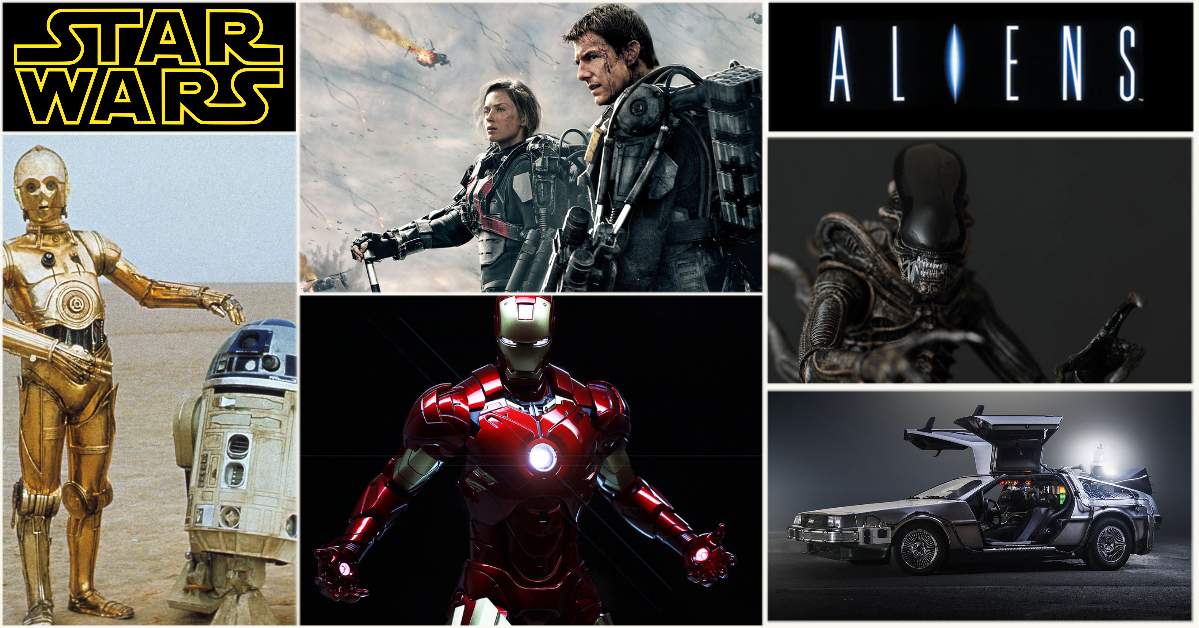 I’ve always loved science-fiction, the films and books I have read over the years inspired me to become an engineer. I thought it would begood to share some of my inspiration which lead to exoskeletons and our current work at Mechatech.

Like just about everyone growing up, I loved Star Wars, it looked like nothing else from the opening sequence. Despite the opening lines of it being a long time ago, in a galaxy far away, it was set wildly far into the future – spaceships, robots, lightspeed, aliens – all awesome! I wanted to be in that future! I dreamed of the Millenium Falcon and X-Wings. They looked real.

Another top 5 film for me is Back to the Future – not at all for its vision of the future… but for the futuristic looking Delorean and time travel, and all that science… a flux capacitor must be possible! At the time, the Delorean looked totally realistic and futuristic at the same time.

Later I came across Aliens, the second film in the series. It was set in a pretty grim industrial future, but the powerloader, tank and spaceships were all amazingly cool, along with the Aliens design by H.R.Giger. It all looked plausible, and this is where I started thinking it was really possible to make exoskeletons.

Robocop for me in the 1980s was brilliant, from the moment Robo switched on, to ED209 walking into the office with his “you have 20 seconds to comply” I thought it was awesome.

“YOU HAVE 20 SECONDS TO COMPLY”

I had already been researching exoskeletons 10 years before this film came out, so I was really excited to see it. The idea of creating that first exo, including arc-reactor in a cave from missile parts was like a dream come true. Then once Tony Stark starts work on new suits in his lab at home, it again struck a cord with me. Of course, the arc-reactor was definitely still sci-fi, the actuators were wildly strong and I picked holes in the frame design at the time, but the whole ironman theme was inspirational.

I think the closest portrayal of exoskeletons to what could exist was in the excellent Live.Die.Repeat. or Edge of Tomorrow (2014) – they looked real, if cumbersome, but could be possible. They worked with battery power, but hydraulic actuators, and looked very strong, without allowing anything to over-the-top

This is my all-time most inspirational influence, the books changed my life. I loved reading and poring over the pictures Masamume Shirow drew. The first time I saw these were in 1994. He created a world of master-slave exoskeletons called landmates, along with so many other brilliant technologies and ideas. I date my obsession with exoskeletons to 1994, and it has not gone away.

Cinema and Science-Fiction writing always runs ahead of reality. People can imagine things a long time before the engineering makes it possible. The company I created, Mechatech, has been setup to solely focus on exoskeletons, and bring them into reality. Along the way I have been hugely influenced by those films I saw growing up.

As a result of our research Mechatech is currently focussed on motion capture exoskeletons, which have hundreds of uses. One of the first areas I understood which had immediate potential was Virtual Reality. I had used this for a few years once the HTC Vive came out, and it was like a whole new world of tech was opening up with new opportunities.

Our AgileVR exoskeleton, which captures motion, allows unprecedented accuracy in motion capture of the human body, in real-time. It allows two-way communications, to allow, for example, forces from a virtual world to be transmitted to reality – you input your movement into VR and receive force feedback from those movements back on your body.

I see the AgileVR as one of the stepping stones on the way to powerloaders, landmates, ironman suits, and time travel. Actually time travel was a joke, but the limitless possibilities of VR with full body immersion will allow time travel virtually.

For me, this is the stuff of science-fiction – exoskeletons physically interacting with virtual reality.

Cinema and Science-Fiction writing always runs ahead of reality. People can imagine things a long time before the engineering makes it possible.

The novels of Jules Verne had a grand idea of submarines, a long time before submarines existed.

Robert Heinlein had many great ideas for the future, and Starship Troopers outlined power armour in 1959… a suit to make soldiers super strong.