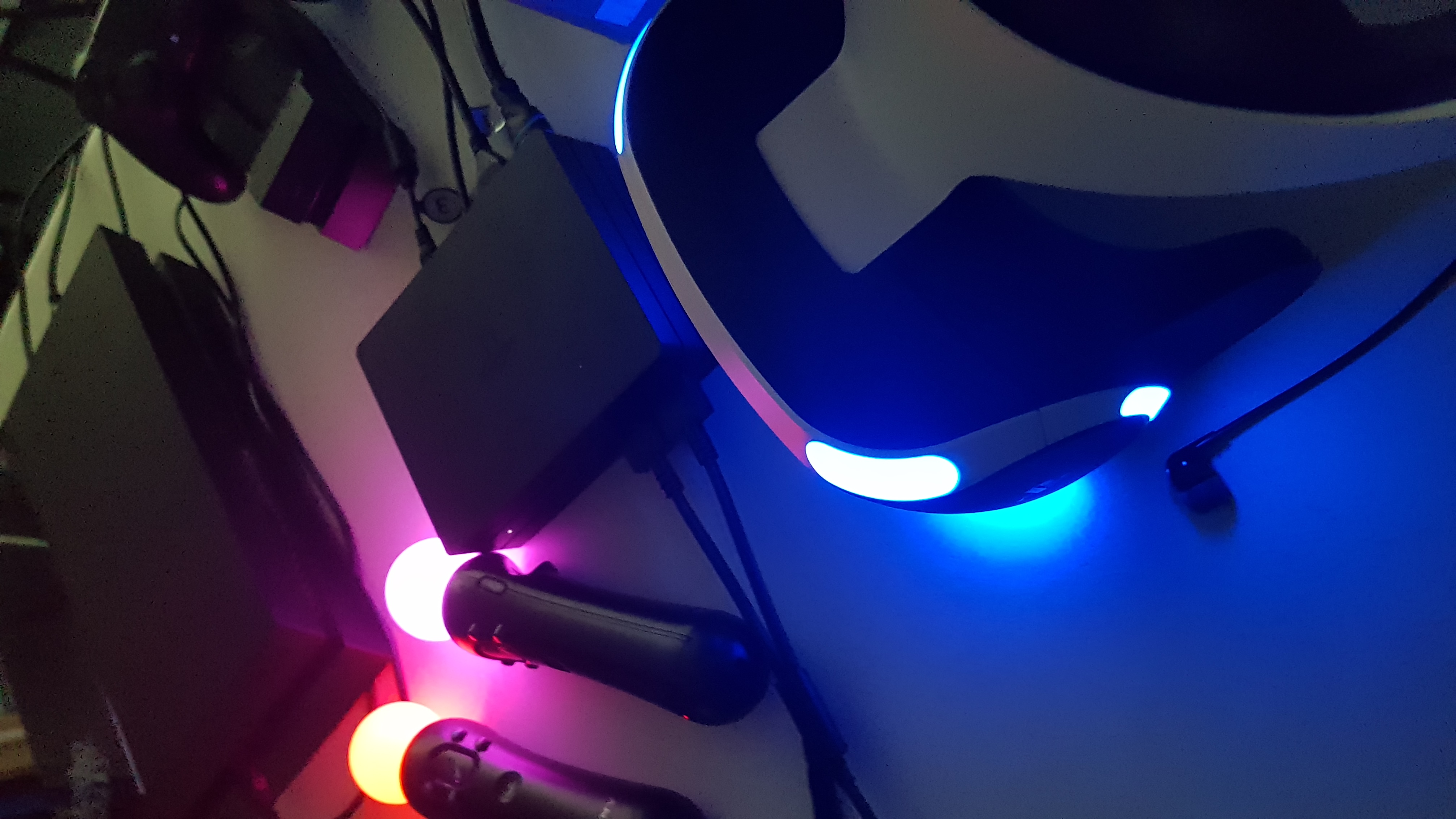 While getting the PSVR, we also got the mega pack which included PlayStation VR worlds, Wipeout VR, Skyrim VR, Astro Bot and Doom VFR. Which I believe is a great starter set of games for VR. I’ve been able to use other VR setups before but if you are new to VR, the PSVR would be a great way of understanding what VR has to offer and what it’s all about.

Astro bot is a fun puzzle game aimed at a younger audience but still fun for any age. Unlike most VR games Astro bot is done from a 3rd person point of view, which is refreshing from most VR games. Astro bot makes use of the Dualshock4 controller but due to the 3rd person nature of the game, this works. Progression of abilities and involvement increases as you go through each level, from just controlling the character to headbutted balloons to clear the path. The music is funky and fun, along with the bright colours it’s a light-hearted game but provides massive entertainment.

The music is funky and fun, along with the bright colours it’s a light-hearted game but provides massive entertainment

It is not a room-scale movement came, so can be played sitting down, making it easy gameplay for all ages.

Skyrim is a classic game. Massive open world fantasy adventure with huge amounts of back story and depth. I’ve played countless hours in the original game and converting in VR I was not disappointed. The sensation of being in a world which I known intimately but only through a TV screen was amazing. The ability to hold two swords or a bow and arrow, was a childhood dream coming true. The story hasn’t changed so for anyone coming new to the world will have hours of intrigue and decisions to have to make, to change certain outcomes of the story. Weirdly one disappointed was actually being VR stops you from seeing you character. So why bother making your character look good? Why make your armour match? Crafting is a big part of the game and it’s reduced in importance if you can’t see the armour you’ve spent a few hours collecting materials for.

The poor part of Skyrim VR was the HUD, which has not been modified from the original. The original was made for a Dualshock controller not for move controllers. The menu was orientated in a particular way which meant sometimes you had to spin to find your menu. Not ideal after pausing a fight to heal with a potion. The graphics are not the best you’ll ever see, but Skyrim is 7 years old and game development has massively moved on, however this does not affect game-play and enjoyment. The game has got many options for locomotion, allowing for all levels of comfort and personal choice. Switching between locomotion and smooth artificial motion, while also being able to alter the turning style from segmented to continuous.

Wipeout is a full on, fast paced racer. Being thrown into the centre of an anti-gravity racer competing against 7 other riders, is a blast!

Being thrown into the centre of an anti-gravity racer competing against 7 other riders, is a blast!

From shooting rockets to barrel rolling over an jump. Wipeout is super exciting and thrilling. A Fan of the series would surely love this instalment. However, the pace of the game and motion could be too much for some people, as it was for our electronics engineer. I personally found it easier than some games because it’s just like driving, where the motion of the car is different to your body being static on a chair. This game is great for VR but doesn’t require room-scale tracking and only us the Dualshock4 controller. Small downside is the repetitive nature of the racing and the aim of each race in the campaign could be clearer.

Doom is aimed at an older audience, being more violent and scary. If you are a fan of the originals, then the new game is a well-received update. Doom in VR though is even better personally! If you’re looking for a way to increase, you heart rate and stink a ton of ammo into some creatures from hell then this is the game for you. From slow, jumpy puzzles to fast paced boss battles, Doom VFR is the best VR game I’ve played to date.

It’s an FPS with the ability to aim your weapon with your eyes and hands not through a controller. The locomotion of dashing sideways is a great addition but needed, because teleportation does break the immersion of the game too much in my opinion. However, teleportation and dashing have helped me with motion sickness, I personally struggle with smooth motion and to not feel it at all during this fast pace FPS, then I can allow teleportation.

Graphically Doom VFR is amazing and the visuals during game-play are bright and immersive. I actually felt I was shooting a plasma rifle. Not a downside of the game but careful throwing grenades as it’s easy to drop them at your feet due to the controls.

Go to our youtube channel or other social media feeds, for videos of gameplay.

Further game reviews to come as Mechatech acquire more for the PSVR.