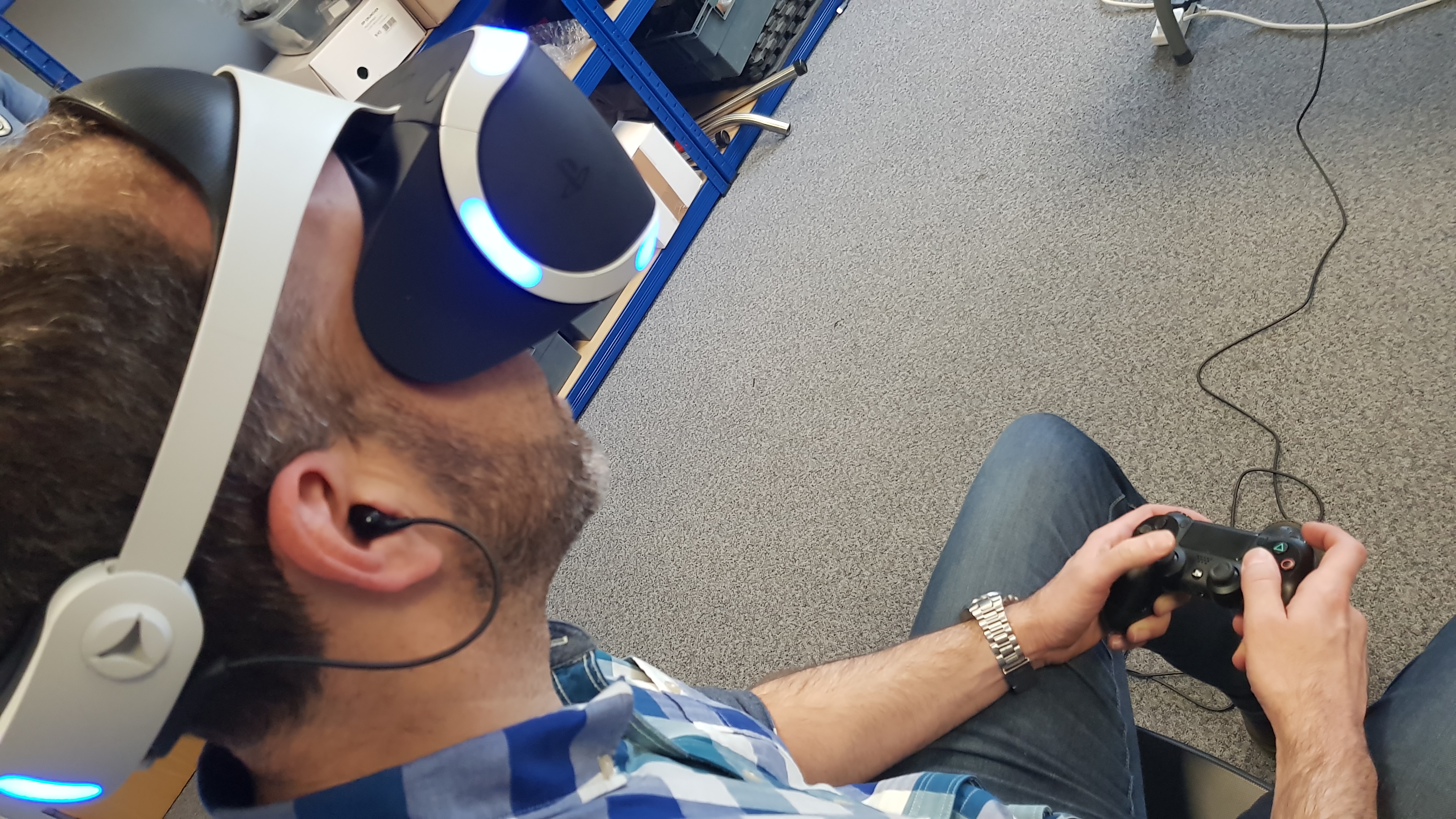 PSVR time! After playing on many VR setups, Mechatech finally got it's hands on a PSVR. So here's my experience of the product, from the unboxing in this post, to the game-play in a following post. I'll give a brief review of the headset and setup, to all the games I've played in the product, hopefully giving you an insight to what it's like to play and own a PSVR.

Firstly, the packaging, classic PlayStation presentation. Bright, bold outer shell for advertisement on shop shelf, with a plain white cardboard box on the inside. The box was parted into two compartments, splitting the headset from the extra peripherals such as the wires and camera. Every item was wrapped up in its own clear plastic bag, and labelled with an appropriate number, later used in the instructions.

The box contained a large blue booklet, which was the clearest set of instructions I’ve ever received in a package. As clear as a Lego manual, but with minimal steps, which really contradicts the VR is complicated to setup stigma. There were 7 stages to the setup process, with a few other small white booklets for the camera and the health and safety. The PSVR was presented very similar to the PS4 box which is in keeping with the brand.

The box had a cardboard divider in the middle of the box which is there protect the headset. The headset was wrapped in a polystyrene wrap for protection. The packaging felt reasonably sturdy and secure, however I wouldn’t want to drop the box now knowing that the underside is where the headset is located and has less protection from that direction.

After unwrapping all the items and placing them on a table, getting the headset out of the box for the first time was a very exciting moment. I’ve personally been wanting to play with this device for some time and to finally have it in my hands was amazing. The first thing to notice is the bulk and size of the headset compared to the VIVE or other VR products, at first glance it’s much bigger. Due to the headband attachment system the weight of the headset was evenly spread around the whole device, instead of a large mass in the goggles and lightweight straps at the back. It didn't feel heavier than other products, it was just distributed differently. The colour scheme also made it stand out compared to over VR headset, as it’s the first to use white for certain areas instead of plain black for every component.

I personally really like the design of the PSVR headset.

I personally really like the design of the PSVR headset, futuristic and modern but not out of place and off putting in a normal family house. The neutral colour scheme was smart and clean with gently flowing design lines around the body of the headset. The LED blue markers are a clear indication that the product is on and working. The buttons for the headset were concealed in the main body volume and were adequately sized. However, the button for adjusting the distance of the lens, felt cheap, it probably required better damping underneath to give it a softer press. On the other hand, the ability to shift the distance of the headset lenses from the head, is a saviour for people who wear glasses. This is massive pro over other headsets. The headband system is a great system for putting on the headset, this is probably why the new HTC VIVE COSMOS product is adopting the mechanism. It takes the weight of the goggles off your face, especially around the eyes and brow of your face. This reduced sweating and increase comfort for longer gaming periods. the push button to release the headband mechanism is very easy to use, along with the ratchet dial for tightening the device during game-play.

The process of setting up the PSVR was simple but did involve a fair few wires. After disconnecting the PS4 HDMI cable to the TV and putting it into the PSVR box, I had to connect the box up to the PS4 with its own HMDI cable and a separate USB cable. All these cables are numbered and cross-referenced in the instruction manual, so it’s straightforward to follow. The headset has a combined cable pre-installed into the headset which cannot be removed. This is around 5m long and plugs into the front of the PSVR box.

The camera was a very easy plug in and play system, as soon as it was connected the PS4 recognised the device and went through a simple setup page, which makes you stand in the centre of the camera viewing area, in a prescribed human shape. Another feature I really like about the PSVR is the provided headphones, which connect to the 3mm aux jack for other headphones if you choose too, and to a plastic push clip on the other side symmetrically. This adds up to a tidy cable management system with easy access to putting the earphones in and out during game-play. We find the HTC supplied headphones are easy to tangle up, and awkward to put on.

Adding the headphones that come with the PSVR, really increases the immersive experience.

When I loaded the games into my hard drive and loaded the first game, I was pleasantly surprised that the Dualshock4 controller could be positionally tracked like the headset. This does allow for a different kind of game-play compared to Move controllers. Adding the headphones that come with the PSVR, really increases the immersive experience. The added feature of ear bud holders in the side of the headband is also a smart, tidy solution.

I will be trying and reviewing games I’ve played before on a normal console – like Skyrim, and new games especially designed for PSVR. I’ll let you know my thoughts!